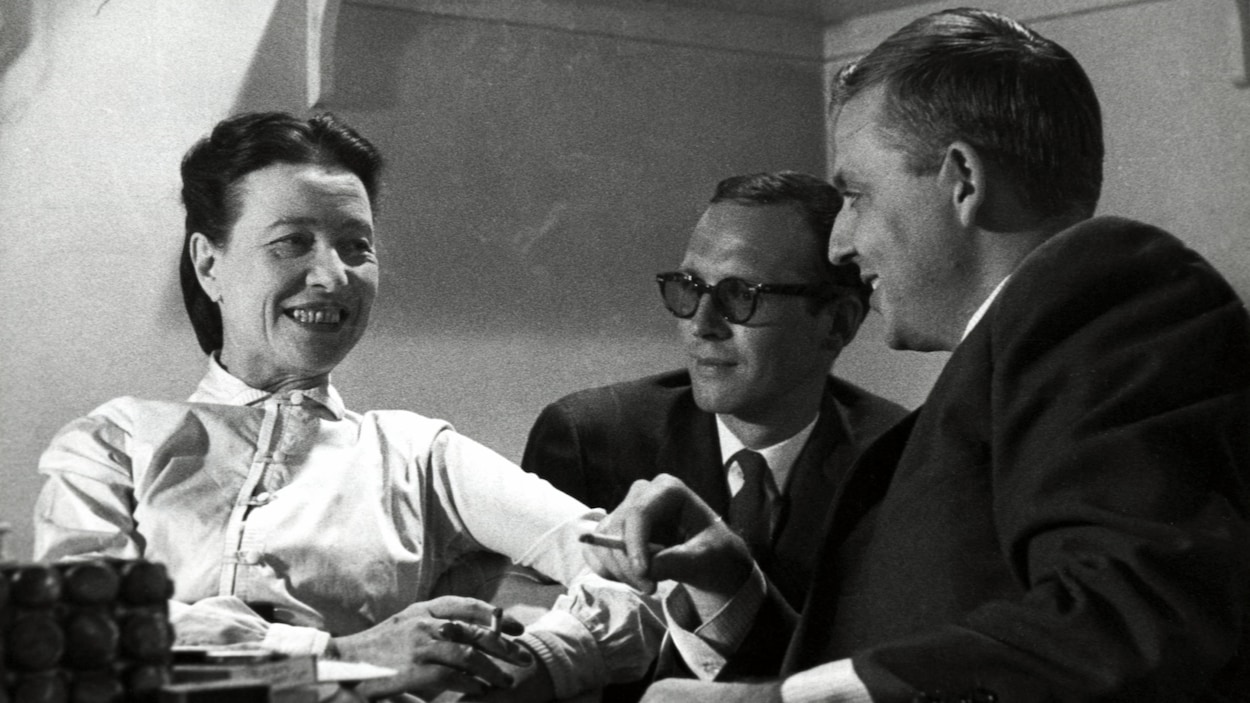 A key figure of the French feminist and existentialist movements, Simone de Beauvoir is known to many as the author of the influential essay, Le deuxieme sexe and interestingly as the life-long companion of arguably the best-known philosopher of the twentieth century, Jean-Paul Sartre. Similarly to how Le deuxieme sexe met critical reception and subsequently found itself on the Vatican’s list of forbidden texts, her long television interview with Wilfrid Lemoyne for Radio-Canada in 1959 was cancelled in response to pressure exerted by the Roman Catholic Archdiocese of Montréal. It would then be kept in Radio-Canada’s archives until de Beauvoir’s death in 1986, when it would be broadcast for the first time. Even then it was subject to indirect censorship when it was cut short by coverage of the hockey playoffs. While its censorship was hardly surprising, given the controversial nature of their discussion touching on atheism, existentialism, communism, marriage, love and freedom, it also demonstrates the existence of a certain level of state censorship of powerful women at the time. Furthermore, the interview’s censoring highlights the potential power of mass media for intellectuals as a platform for social change while serving as proof of the turbulent nature of the intellectuals’ relationship with the media.

Firstly, let’s focus on what made the interview so controversial at the time. The first broadcast of the interview in 1986 is preceded by a mini-interview with the original interviewer, Wilfrid Lemoyne, who explains that it had initially not been broadcast ‘pour respecter les opinions et les croyances du vaste public canadien français’ and underlines how de Beauvoir was ‘en guerre ouverte contre l’etat’. This becomes very clear in the interview when de Beauvoir declares that France’s regime is one of oppression and is ‘systématiquement plus autoritaire et encore plus antidémocratique que la fausse démocratie que nous avions auparavant’ (making reference to the Fourth Republic). Another part of the interview which would no doubt have shocked the masses is when she draws certain parallels between marriage and prostitution: ‘Si deux êtres restent unis de l’un à l’autre par des institutions et les liens purement extérieurs, alors qu’il n’y ait plus rien dans leurs coeurs ou dans leurs chairs qui les rattachent de l’un à l’autre, on arrive à quelque chose qui me semble aussi répugnant que la prostitution.’

Now let’s look at the television interview as a genre in terms of crossing the borders between media, i.e. its intermediality. Gildea identified that ‘Intellectuals, of course, always required a public and therefore needed to manipulate the media of the day’ (Guildea 2002, p.190) and since television was to become one of the most predominant media, it was important that intellectuals adapted their engagement to keep up with technological advancements and not just limit themselves to traditional methods of engagement. The television interview allows the audience to see her works and ideas from a new personal and visual perspective. It gives her the opportunity to identify what she sees as the most pressing issues of the time, one of these being the Algerian War of Independence. Additionally the tv interview serves as a vehicle to present her ideas and works in an accessible manner to the masses and therefore has the potential to expand her readership, while of course being limited in the extent to which she can tackle ideas which she has previously dedicated whole books to explain and explore, which the interviewer actually mentions: ‘Vous demander la définition de l’homme dans l’optique de l’existentialisme, ce serait, de vous demander, je crois, de résumer beaucoup de grands livres philosophiques’, which de Beauvoir agrees would be impossible.

So, while there was potential for the intellectuelle engagée to use the medium to intervene in public debate, at the time of this interview, intellectuals very rarely engaged in the public sphere through this platform. Sartre wouldn’t appear on screen until 1969 (Leymarie 2001, p.113) (although many of his key ideas were presented on screen by de Beauvoir in the meantime). This is hardly surprising given that, for de Gaulle, television was designated as ‘un instrument magnifique de soutien à l’esprit public’ (Leymarie 2001, p.113), and content from intellectuals such as this interview was hardly likely to lift the spirits of your everyman in a manner de Gaulle would approve of. Since television was state-controlled in France and Canada, it was highly unlikely that intellectuals would be granted a space on the platform to spread their word even if they wanted to. Either way, at this time, intellectuals were very sceptical of it, as Leymarie underlines: ‘Les intellectuels tiennent souvent sur la télévision un discours critique, l’accusant d’être un instrument du conformisme, un facteur de dépolitisation ou un moyen de propagande du pouvoir’ (Leymarie 2001, p.112-113). However, de Beauvoir accepted to appear in this interview which hints that she believed in the potential power of the television interview to impact public opinion and so stepped down from her ivory tower, as it were.

Incidentally, the mass media weren’t ready for what she had to say. Nevertheless, the interview was finally broadcast in the end and has influenced public opinion of de Beauvoir ever since. It is often said that mass media were responsible for falsely portraying intellectuals, as underlined by Winock: ‘Les médias, souvent, “se servent mieux des intellectuels que les intellectuels ne se servent les médias” (…) et mettent en cause la position de l’intelligentsia’ (Winock 1997 cited Leymarie 200, p.113). So, moving in this direction, let’s now look at whether de Beauvoir is made a victim by the mass media or whether she uses it to serve her own agenda.

In certain respects, she uses the interview to set the media straight. The interviewer explains how the masses in Canada perceive existentialism as ‘toute cette jeunesse bruyante qui aimait beaucoup le jazz des années d’immédiat après-guerre (…), qui fréquentait St-Germain-des-Prés, qui se réclamait l’existentialisme’. De Beauvoir is quick to dissociate herself and Sartre from this group, that according to Gildea ‘was certainly constructed by the press as a doctrine of nihilistic and amoral youth’ (Gildea 2002, p.179) and states the only thing that linked the pair with this bohemian group was ‘topographie’, and in so doing attempts to restore existentialism’s public image.

On the other hand, Lemoyne seems to constantly call de Beauvoir’s position as a stand-alone woman intellectual into question and implies that she only serves as a mouthpiece for Sartre. He is very condescending when he asks if she believes that women can make as thorough a commitment as a man to an artistic or ideological oeuvre and that she is ‘peut-etre l’exception’, implicitly doubting whether she, as a female intellectual, is equal to her male counterparts. Given that the key message of Le deuxième sexe is ‘On ne naît pas femme : on le devient’ (De Beauvoir 1949, p.293), it is clear what her answer would be, but nevertheless he proceeds to question her arrogantly. Similarly, he asks her to comment on Béatrice Beck’s wish ‘que les hommes aient de génie et les femmes, enfants’, expecting her to attack the other woman’s statement. This exemplifies a patriarchal society’s tendency to pit women against other women to prevent them from challenging male dominance. De Beauvoir is not gullible, however. While she does go on to criticise the statement, she is sure to applaud Beck and to stress that she herself is a single mother while also engaging in writing, journalism and research and therefore defies her own statement.

Had this interview been broadcast as planned, de Beauvoir would have been able to convey her feminist and existentialist ideologies in a new, accessible and engaging manner likely to shape public discourse on the what she identified as the most pressing issues of the time. While intellectuals did indeed hold an influential position in society at the time, television broadcasts would not be a popular platform for intellectuals until the 1980s. Ultimately, de Beauvoir’s gender would prevent her from being given such a platform to authenticate and spread her ideologies until after her death. Sixty years on, it is clear that the interviewer gives her a voice but only within the context of sexist interrogation. This interview begs the question: if Wilfrid Lemoyne was in conversation with Jean-Paul Sartre, would it have been censored in the same way?