French philosopher Jacques Derrida undoubtedly wanted his words to do the talking. Even as part of the movement breaking down those very words to reshape and restructure societies and ideologies, Derrida’s text took precedence over any image or character that he created for himself as what Jean Paul Sartre would call an “intellectuel engagé.” Derrida should certainly be considered an intellectual; his contributions to literature, linguistics and philosophy, albeit presented in an often controversial manner, position him as an incredibly important figure in shaping society today. Derrida’s behaviour as one of these intellectuals, however, makes him an intriguing subject to study especially considering his interactions with the media.

“Just how much responsibility does an intellectual have to throw their persona into the public sphere alongside their beliefs?”

Historically, the explosion of new media in the 20th century gave rise to Sartre’s “intellectuel engagé” since they were offered a greater and broader platform than ever before to access the public arena and share their ideas. Print news articles as well as radio and television interviews added an intermediality to these concerned thinkers’ fight for truth and justice. Rather than merely a written text distributed amongst other educated peers, this audiovisual media gave the intellectuals personality and allowed them to justify, expand upon and add a humanity to their ideas. These new possibilities were not always perceived as positive, especially and unsurprisingly not for Derrida. Wanting to keep the focus and significance on his work, rather than on his image, Derrida refused public photography up until 1979 and held very few public interviews. The 2002 film from which this interview was taken represents one of the first in-depth looks into his life and once again raises the issue of the intellectual’s involvement with mass media. Derrida’s mysterious and elusive character drew strong critique of his ideas, but just how much responsibility does an intellectual have to throw their persona into the public sphere alongside their beliefs?

Derrida’s ideas came at a time rife with political conflict and uncertainty. In France, Charles de Gaulle’s newly founded Fifth Republic faced issues of immigration and conflict with Algeria. Later in the decade saw the events of May 1968 leave a lasting mark of French society, with intellectuals like Derrida himself taking up stances against authority. Outside of France, the USA started a war in Vietnam which would raise enormous political and moral questions. Derrida’s Deconstruction may not have been a clear answer to these questions, but it was perfectly positioned to challenge the inner workings and basis of those conflicting institutions. Every regime, establishment or political power had to have some kind of foundation in text, whether that was a constitution, manifesto or otherwise. Deconstruction tore those texts apart at their very core and provided people an accessible means to question the attitudes and decisions laid upon them. As Michele Lamont describes in his article “How to Become a Dominant French Philosopher”, Derrida’s work “appealed to the intellectual public as a status symbol and as a novel and sophisticated way to deal with late 1960’s politics.” (Lamont: 1987)

Any movement such as this would need a leading voice, however. As much as Jacques Derrida may not have wanted his physical image and persona to be associated with such a grand evolution, he as the author and speaker had a responsibility to carry the word forward and communicate the values of deconstruction. The responsibility of course represented a fine balance; the personal aspect of these ideas belonging to his image seemed to make Derrida uncomfortable, as he expresses in the interview. That “narcissistic anxiety” that he speaks of presents Derrida as an intellectual who, despite confidently and openly expressing his vision of how society should be treated, was perhaps shy of the burden that came with personally and physically carrying that message.

Deconstruction, however, relies on such a global application that it would need to be celebrated and shared in order to have any lasting impact. Challenging society’s great institutions requires a strength of character that seems somewhat undermined in Derrida’s evasive and ambiguous approach. Lamont argues that “Derrida, through his work, presents intellectual life as the adventure of a modern Prometheus whose rationality challenges power.” (Lamont: 1987) but surely Derrida himself would be required to embody that “intellectual life” in order to exemplify his values and propagate his ideas? Attempting to separate his image from his work seems to go against the very teaching of Deconstruction that all words and text are intrinsically linked to everything around them. If defining Deconstruction while simultaneously remaining faithful to its values, the “concept” and “character” of Jacques Derrida would be a fundamental part of that definition. In Derrida’s terms, his own persona, however anxious or unsettled it makes him, would have to be considered a trace of everything he puts into the public arena. 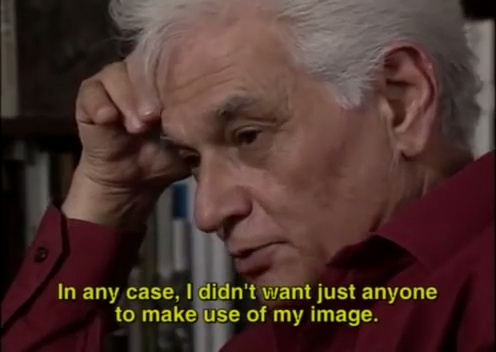 On a broader scale, the modern environment of mass media makes it inevitable that the words and teachings of any intellectual drag their name and character with them. While Derrida (2002) might have been the first full exploration of the man in the eyes of the public, reaction to the film shows how uncontrollably linked author, text and audience are in this time. Thanks to his controversial and divisive manner, Derrida may now be seen as a separate entity to Deconstruction, but the two undeniably rose to notoriety together in the later stages of the 20th century. In the words of Lamont:

“Derrida capitalized on the structure of the intellectual market by directing his work to several already constituted publics rather than to a shrinking philosophy public…Cultural media had a central role in disseminating Derrida’s work to a large public.” (Lamont: 1987)

The notoriety and popularity attached to Derrida’s name hardly come as a surprise considering the magnitude of Deconstruction as a movement in linguistics, law and politics. Author Antonio Calcagno comments that “The author Derrida inspired and continues to inspire a certain way of dealing with social and political questions” (Calcagno: 2009) but here we can once again see that Derrida is inseparably linked to the movement of his creation. From what the experience of Derrida and his peers alike has shown us, it is impossible to enter the public sphere as an intellectual without carrying that personality “engagé” in tow. The dynamic of author and work is fundamental in the role of an intellectual, as Calcagno states, the importance is “not only what Derrida says, but that it is Derrida himself that says it.” (Calcagno: 2009)

Intellectuals ultimately cannot escape the responsibility of owning their text. Their words are eternally connected to them as authors and thus any great significance and public celebrity belongs to both author and work. This in itself carries as much political significance as Deconstruction promised. Derrida’s work not only broke down the structures of world politics, but the very “authorial politics” (Calcagno: 2009) to which he fell victim. Despite the “rapport compliqué” that he maintains with his image as he mentions in the interview, Jacques Derrida had to allow himself to be entered into the public sphere, whether by textual, visual or physical means as part of his intellectual responsibility. Lamont reminds us that Derrida’s style was seen as “pleasure without responsibility” (Lamont: 1987) but as seen in this interview, intellectuals reach a point at which they must accept a duty they cannot control.

All uncredited images are stills from the above YouTube clip.

Dastur, Francoise. DERRIDA AND THE QUESTION OF PRESENCE. Research in Phenomenology 36:45-62. 2006.

White, David A. “The Foundation of Deconstruction: Generalities at Play.” In Derrida on Being as Presence: Questions and Quests, edited by Michalska Anna. 228-68. Berlin; Boston: De Gruyter, (2017)