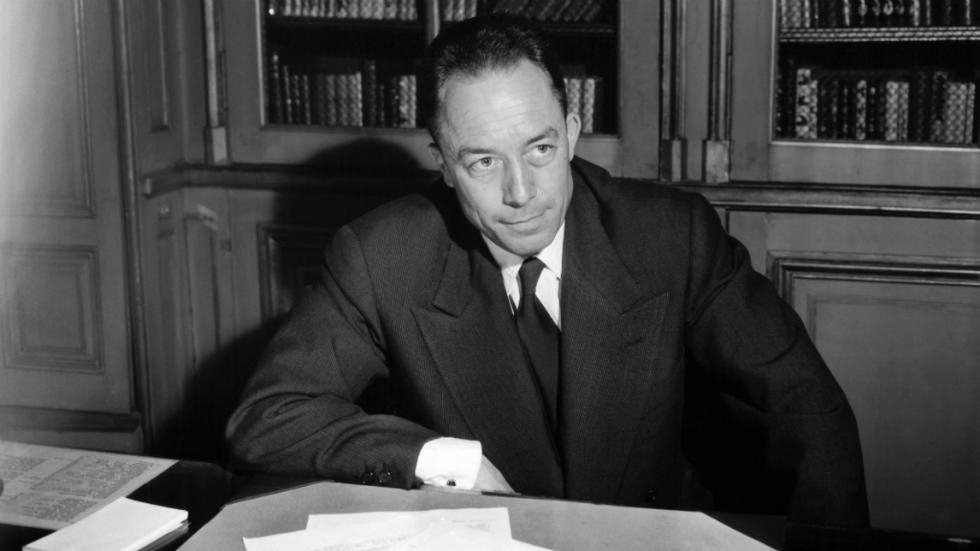 Albert Camus, ‘widely regarded as the most important literary figure in the Western world,’ [i] was a French-Algerian writer and philosopher in the mid-twentieth century. 23rd October 1957, fresh off the back of receiving the Nobel Prize in Literature for his ‘important literary production, which with clear-sighted earnestness illuminates the problems of the human conscience in our times,’ and Camus is one spectator amongst 35,000 at the Parc des Princes stadium watching the football. The match, Racing Club de Paris vs. Monaco, is being captured by the actualités françaises and in the brief pause following an away goal, the camera turns to Camus (fig. 1).

Camus is dressed in his signature shirt, tie and trench coat, and is characteristically sombre faced; fitting for the man often seen to be the embodiment of ‘the Absurd’. Associated with the 1940s, a decade dominated by World War II and the bleak post-war period, the Absurd could be defined, as Ronald Srigly puts it, ‘a type of existentialism similar to that defined by Jean-Paul Sartre in early works.’ [ii] In brief terms, Absurdism according to Edward Hughes is ‘the confrontation between the human desire for a rational account of the world and a world that resisted any such explanation.’ [iii] Ironic, then, that the man who developed such a complex system of thought should accredit his knowledge of morality to football:

It is hardly surprising in the era of ‘fake news’ that this quote (so widely circulated that it appears printed on the back of t-shirts), is actually a misquote from a different interview in 1959. Le Monde cites:

In any case, the sentiment stands and Camus’ status as a football fan has endured just as long as his fame as one of the greatest French philosophers of the twentieth century. The Albert Camus Society, perhaps offended by the prospect of Camus being eternalised as a football fanatic rather than an intellectual of the upper echelons, refutes these claims, writing:

People have read more into these words than, perhaps, Camus would want them to … Camus believed that the people of politics and religion try to confuse us with convoluted moral systems to make things appear more complicated than they really are, possibly to suit their own agendas. People may do better to look to the simple morality of the football field than to politicians and philosophers.

Nevertheless, Camus has been presented alongside this quote (or misquote) across both the anglophone and francophone world – see American site Fox Sport Stories or French So Foot Blog. Besides, is this not what he would have wanted? One of the defining features of an intellectuel engagé is a moral obligation to engage in a wider societal and political sphere than simply an academic one, [iv] and here, almost 60 years after his death, Camus continues to transmit his philosophy to the public through the allegory of football. It could be argued as even appropriate that he be memorialised in this way, versus the so-frequently caricaturised ivory-tower intellectuel, considering the fact that he himself stated explicitly he was neither a philosopher nor an existentialist, [v] and he famously did not fit in with the intelligentsia of Paris – his feud with Sartre has become somewhat legendary.

Born into working-class colonial Algeria to European parents, Camus stood apart from normal bourgeois life of the Métropole, so it is hardly surprising that he never quite shook the status of ‘outsider’ to his Parisian contemporaries. Camus was a pied noir – a term used for those born in Algeria of European descent, and life as a petit colon is a backdrop for much of his oeuvre. It was in fact this ‘colonial paradigm’ [iii] that dictated much of the end of his career, including his final rupture from the intellectuel community. In the midst of the Algerian War for Independence, Camus received word of his Nobel Prize and during a conference for the event, pressed by questions from all sides, he famously declared:

This statement prompted a backlash from Sartre and de Beauvoir in particular, who supported the war – a few sacrifices were, they thought, inevitable in the quest for the ‘greater good.’ In essence, they believed that upholding a principle was more important than an individual’s life, justified by Marxist ideology. Camus, on the other hand, believed that no ideal was important enough to justify killing. As a result, he was parodied in a brutal reformulation of his declaration, as quoted by French journal Hérodote:

So, we see Camus is engagé at every turn, and in the 1957 interview he is typically cryptic, imploring the viewers not to blame the goalkeeper for letting in a goal as it is only ‘quand on est au milieu des bois qu’on aperçoit que c’est difficile.’  Whilst Camus’ social and political engagement is famous, it was preceded by his engagement with football. As he tells the reporter ‘j’étais goal au Racing Universitaire Algérois,’ from an early age he played football on the streets of Algiers, until adulthood he played for the team that won the North African Cup (fig. 2). At 18 he contracted Tuberculosis and following his recovery his lungs were never strong enough for him to play again. But he never stopped loving the game. Football, as French academic Gerard Lemarié humorously summarises in a YouTube video, offered Camus lessons in courage, intuition, lucidité and solitude. In this context, however, football holds significance other than simply lessons in morality.

The Independent states that ‘Camus’ love of football can only be understood in the light of these broader intellectual struggles.’ [vi] Consider Camus’ widely celebrated essay, Le Mythe de Sisyphe. A single sentence can be used to summarise the Absurd; Sisyphus is sentenced to eternally roll a rock to the top of a mountain, from where it rolls back down over and over. This demonstrates the futility of human existence, that we search for meaning where none exists, and thus demonstrates the Absurd. [v] However, in the face of this depressing thought, Camus actively rejects nihilism, and argues instead that ‘the Absurd is our only reality, our only good and must be lived with all the bittersweet way, with passion, lucidity, revolt… A long, lucid, and intensely indifferent life is the defiant révolté answer to such a fate.’ [i] How better to demonstrate your indifference, then, by being interviewed about your Nobel Prize (the most prestigious literary prize worldwide, it could be argued) than at a football match? And what is more absurd than the game itself? Just like Sisyphus is condemned to roll his boulder up the hill time and time again, a team sometimes wins, inevitably loses, but they play again and again. Besides, nothing is more absurd than kicking a ball around a field for no specific purpose. Just like Camus’ solution to Sisyphus’ existence is to imagine him being happy, the solution to the irrationality of football is enjoyment.

So, if we understand that finding joy in banality is the ultimate revolt against the Absurd, we see why Camus – as the Independent puts it – ‘revelled in the joyous irrationality of football.’

N.B. All unreferenced quotations have been taken from this clip.

N.B. All other primary sources are referenced through use of hyperlinks in the body of text.