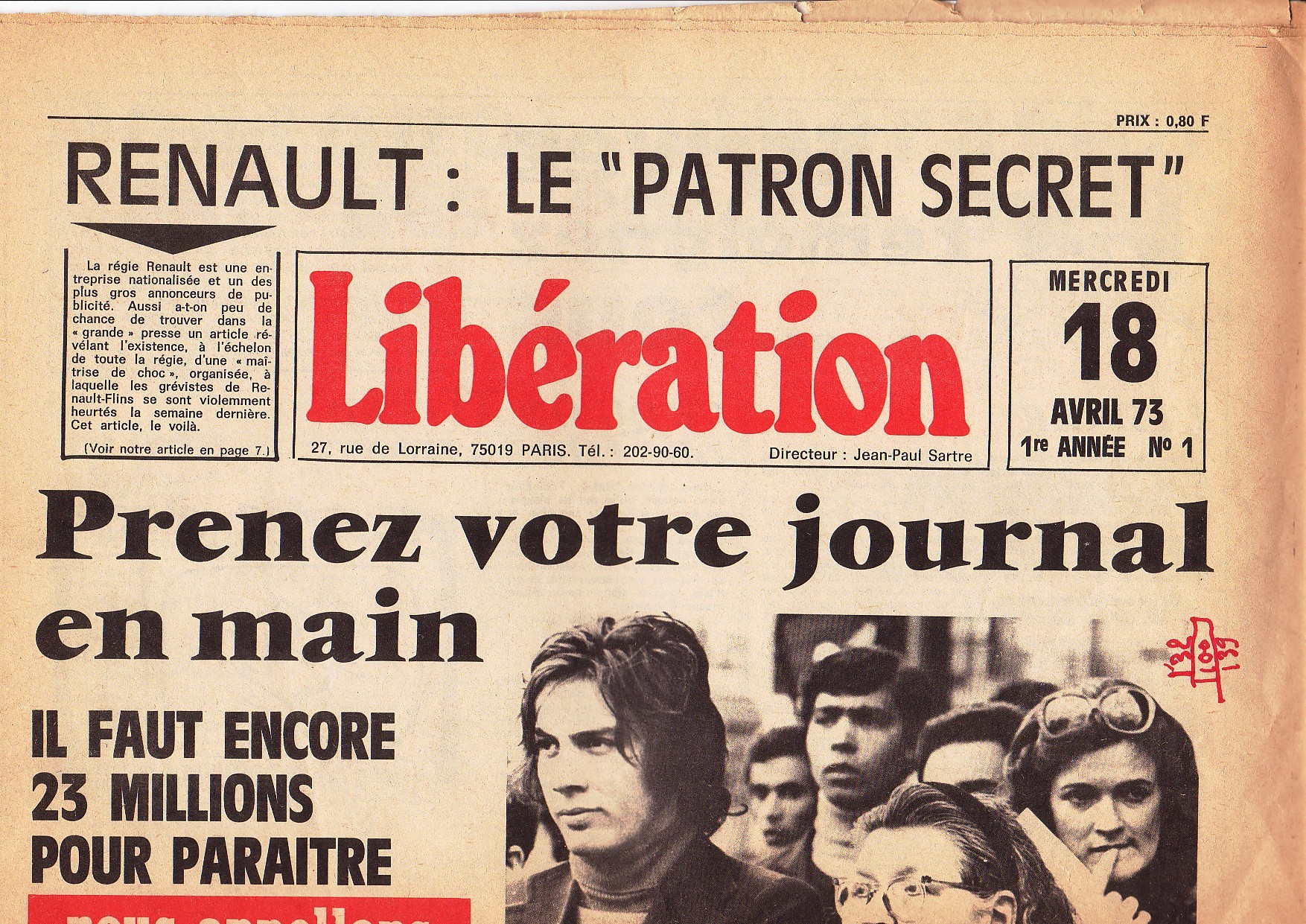 The first edition of the newspaper Libération, the brainchild of journalist Serge July and philosopher Jean-Paul Sartre, was published on 18th April 1973. The front-page boldly proclaims, ‘un nouveau journalisme’, the dawning of a free and independent press administered by the people. Viewed by Martin as, ‘un enfant de mai 1968’, the newspaper was not produced merely by journalists, but by militants specifically of the Maoist Proletarian Left.[i] The image gracing the front-page shows a crowd of people of varying ages gathered together. The articles and snippets allude to Libération’s aims and reasons for existence, which were largely to create a newspaper to which the working class, who Sartre and July believed were corrupted by the bourgeois ideology of the existing press, could relate.

The word Libération connotes the freeing of prisoners, the lifting of constraints upon the marginalised and the end to strict regulations, thus consciously indicating the newspaper’s revolutionary aims. The headline ‘prenez votre journal en main’ is a powerful appeal to the public and indicates the newspaper’s wish to grant power and responsibility to those supporting their cause. The image of a hand grasping a paper is emblematic of the raised fist frequently used to convey solidarity in communist symbolism. The phrase has both a literal and metaphorical sense, its double meaning a clever mechanism to captivate the reader. The language echoes that of the Italian brochure for Lotta Continua (Fig.1), a leftist revolutionary movement triggered by students and led by intellectuals much like May 1968, which calls for justice to be placed in the hands of the proletariat. Such terminology was thus commonly associated at the time with radical leftist movements. The decision to render the masthead in red is evidence of their desire to outwardly associate with Maoism, since red is traditionally employed in communist vocabulary. Furthermore, Sartre’s name appears below the heading, so that his involvement in the newspaper’s creation doesn’t go amiss. Reader asserts that his participation can be interpreted as his attempt to re-establish the link between the intelligentsia and the proletariat which he felt the PCF had destroyed.[ii] The masthead and headline of the newspaper immediately distinguish its desired audience: the proletariat hoping for the press, and more generally French society, to be restructured according to communist ideals. 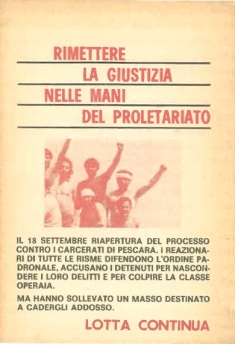 Red appears again as a frame around the paragraph appealing for subscribers, the style of the punchy caption, ‘nous appellons à souscrire’ echoing that of a typical slogan appearing on the streets of Paris in the wake of May 1968. In the headline, two l’s are used in ‘appellons’. However, in the last sentence of the text body, just one is used despite the sentence following the same word order. Encrevé notes that this distinguishes the official variation between ‘interpeller’ and ‘appeler’, the former being the verb originally used before the latter took over.[iii] This free variation manifests Libération’s objective to stand out from conventional newspapers by rejecting traditional grammatical and linguistic rules to create a more radical language more suited to its content. The paper was also radical in its production, using advanced technology developed in the USA. The text pleads for readers to subscribe, since it will not run off advertising or be funded by any external forces like mainstream newspapers, but will instead rely on the people to remain in circulation. The intellectual’s call to the public is similar to when in 1972, members of Groupe d’Information sur les Prisons published information gathered from prisoners to reveal prison conditions in newspapers such as La Cause du Peuple (Fig.2). Repetition of several words within the paragraph, notably ‘cherche’, ‘commun’ and ‘quotidien’, is used to reinforce the outcome of the reader’s subscription. They will have access to a daily newspaper written for, created and shared by the people and which discusses controversial topics in society. Repetition of the word ‘mouvement’, hints that it is not simply another newspaper in response to the events taking place in France, but a continuation of the socialist political movements of the 1960s and 1970s. The revolutionary language employed in the article is persuasive in encouraging people to subscribe so that the newspaper can continue to be published.

Libération’s aim to ensure that nothing is hidden from the public is made clear in the box at the top of the page. It introduces the article found on page 7 entitled, ‘Renault: Le ‘Patron Secret’. The use of the word ‘secret’ instantly suggests that they will be revealing the truths about the company which are otherwise guarded from the public. Truth is the ultimate goal of the intellectual’s work, so he is the ally of the socialist worker. The clipping states that the Renault Company is one of the most dominant advertisers in France, implying that it is the enemy of the leftist newspaper which clearly expresses its disapproval of advertising as a means of funding an enterprise. The word ‘gros’ further demonises Renault and reinforces the idea that the contemporary reader forms part of the leftist opposition to capitalist systems of organisation. The use of quotation marks for ‘“grande” presse’ mocks the popular press and specifies that Libération does not wish to be associated with it, instead providing press specifically for the worker population. The article claims therefore that it will fill a gap in the current press. Renault was a familiar topic to the contemporary reader, since the previous year, a young militant of the Maoist Gauche Proletarienne, Pierre Ouverney, was killed by Renault security during a protest outside the gates. The event sparked protests, leading to many people being arrested and workers fired, thus, the newspaper’s choice to include such resonant content further consolidates its wish to counterbalance the distortion of the current press.

The front-page of the first publication of Libération in 1973 declares the newspaper’s intentions, which were to revolutionise the popular press, allow the French public to speak for themselves and provide unrestricted access to contemporary social, cultural and political issues. The paper immediately locates its socialist audience and employs bias language and symbolic colour to interact with wider contemporary cultural environments and spark a revolutionary ambiance. Mao stated that, ‘unless one has made an investigation, one doesn’t have the right to speak’.[vi] Libération shows intellectuals of the Maoist left striving to continue the social and cultural investigation of French society initiated by the events of May 1968. It formed part of the fight led by intellectuals and the working class against capitalism to overthrow hierarchy and form a better society. Sartre and July’s involvement is evidence of the intellectuals’ attempt to show that they do not stand apart from the masses, but alongside them in their struggle for emancipation and power. Serge believed that May 1968 ‘a réinventé la manière d’être ensemble et de rêver à l’avenir’.[v] Libération vows to revolutionise the writing and dissemination of news, consequently bringing this future vision to life.

[i] Wolin, R., The Wind from the East: French Intellectuals, the Cultural Revolution and the Legacy of the 1960s, (Princeton University: New Jersey, 2010)

Reader, K.A., The May 1968 Events in France: Reproductions and Interpretations, (London: Macmillan Press, 1993)

Wolin, R., The Wind from the East: French Interllectuals, the Cultural Revolution and the Legacy of the 1960s, (Princeton University: New Jersey, 2010)