The Dreyfus Affair was a confrontation between two views of what sort of society France should be. Commonly called l’Affaire in France, it was the case of a Jewish army officer, Alfred Dreyfus, who was wrongly convicted of spying for Germany in 1894. Dreyfus was later pardoned in 1899. Within the Affair, there were two groups: the Dreyfusards and the Antidreyfusards. Intellectuals were at the forefront of this division. Between 1871 and 1914 in France, economic growth coincided with a period of peace and frivolity called the Belle Époque (Stock-Allen, 1999). Drake, however, asserts that there was a ‘widespread sense of unease’ due to fin-de-siècle tension between the traditional and the modern (2005: 9). At the end of the nineteenth century, printing technology had advanced, allowing much faster circulation of the printed press than before. Following the 1881 Law on the Freedom of the Press, publications were permitted to show ‘openly erotic, violent, and politically subversive imagery’ (Everton, 2012: 388). Newspapers not only published articles about the Dreyfus Affair but also illustrations and caricatures. During the Belle Époque, another important visual element was posters. This blog is going to discuss a poster from 1899 called ‘Les Douze Apôtres de Dreyfus’ (Dreyfus’ Twelve Apostles) and will closely analyse the caricature of Émile Zola before focusing on the role of caricature during the Affair.

The poster and its context 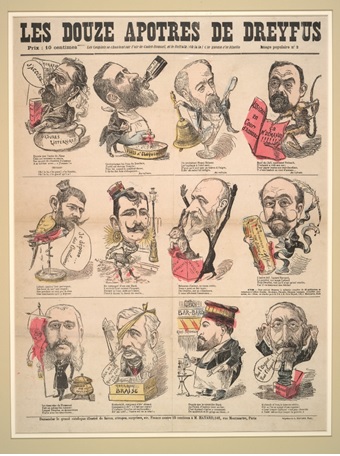 Anti-Semitism is one of the key elements of Antidreyfusard art. Duclert estimates that France had around 70,000 Jews within its population of thirty-eight million (1994: 9). One of the best-selling books of the time was La France juive (Jewish France) by Édouard Drumont which heavily criticised Jews and arguably was one of the principle causes of French anti-Semitism. Artists such as Caran d’Ache also contributed to the persistence of Jewish stereotypes such as an obsession with money, as seen in this poster. The poster has twelve caricatures of politicians, intellectuals or other public figures who were all involved in the Affair. The artist and its source are unknown but it is an interesting example of Antidreyfusard art. The poster is set out as a song and the subheading says the rhyming couplets under each caricature should be sung to the tune of Cadet-Roussel, a popular song from the eighteenth century which satirises a bailiff. The poster’s chorus translates roughly as ‘Oh dear! What a face! What a mug!’ and the whole piece heavily criticises and mocks all those depicted.

Zola and his caricature

Émile Zola is known as ‘the most notoriously maligned but nevertheless most popular writer of his time’ and was the second most caricatured person in late nineteenth century France (Kleeblatt, 1993: 54). Zola’s J’accuse signified the opening of a new phase in Dreyfus’ case as well as a watershed in intellectual history (Drake, 2005: 21). The landmark letter in L’Aurore sold a quarter of a million copies which was ten times the newspaper’s normal circulation, according to Morgan (2007: 198).  It is not surprising that Zola is the poster’s first caricature; he is frequently seen as the principal hero of the Affair and one of the most vilified Dreyfusards.

Zola’s is the only caricature which does not name him explicitly. He is drawn sitting on a steaming chamber pot and holding a book with a quill behind his ear and his signature pince-nez. The stanza could be translated (literally) as:

Since the author of Nana

On a chamber pot he has fun

Wiping himself with… J’accuse!

Nana is the ninth novel from Zola’s Rougon-Macquart cycle of twenty novels, published between 1871 and 1893. Durin (1989: 48-49) notes that of the twenty, four contained Jewish characters and Nana features a Jewish banker called Steiner. It is likely Nana was mentioned in the stanza partially due to the links to Judaism but more simply, it fits with the clerihew rhyme scheme. The second line is most likely referencing Zola’s fleeing to escape imprisonment for libel in 1898. In the background of the caricature, there is a newspaper titled L’Horreur. Due to both being pronounced the same in French, this is evidently a mocking reference to the newspaper L’Aurore which published J’accuse…! The caricature mentions the letter again, depicting Zola as saying ‘J’accuse…!’ and the stanza says he wipes himself with it, suggesting it is worthless, equivalent to toilet paper.

Chamber pots and scatological references are common in caricatures of Zola. In this caricature, the chamber pot has ‘ordures littéraires’ written on it. There is a double meaning because ‘ordures’ can mean either ‘rubbish’ or someone who is a ‘pig’ or ‘swine’. The artist suggests Zola and his work are filthy.  Other caricatures often depict Zola as a pig, linked to the concept of Judensau. Balakirsky-Katz (2006: 116) tells us that the characterisation of Zola as a pig was ‘adopted wholesale’ by 1880, with the ‘accoutrement of the chamber pot firmly in place’ by 1881 and these two attributes became identifying features. Zola’s association with chamber pots has two sources. The first is following the publication of his novel Pot-Bouille in 1882, the tenth part of the Rougon-Macquart cycle. The title’s meaning is closer to a figurative melting pot, not a chamber pot. ‘Unimaginative’ caricaturists, however, adopted the image of the chamber pot and secondly, due to the ‘motif circulating in the anti-Semitic press’ as well (Balakirsky-Katz, 2006: 117). In the nineteenth century, caricaturists used scatology to ‘point up social ills and the failures of those in power’ and to ‘deflate their self-importance’, it was used with Zola to show he was ‘slimy’ and ‘beneath contempt’ (Weisberg, 1993: 18-19).

The Dreyfus Affair is still ‘radioactive’ because its issues continue to be relevant around the world and Dreyfus himself is ‘primarily an abstraction, a signifier for a certain idea of France’ while the Affair is a ‘fable of sorts’ for democracies (Conner, 2014: 24-29). Anti-Semitism, for example, is still happening today, as seen with the recent Pittsburgh synagogue shooting. We can see the Affair’s impact when Pagès (1991: 277) likens it to a cancer spreading over the body of republican France- he creates a violent image. Having discussed the poster, closely analysed the caricature of Zola and briefly considered the lasting impact of the Dreyfus Affair, we should also look at the role of caricature during the Affair before concluding.

For both sides of the Affair, their literature was more than just essays. It also consisted of novels, poems and even works of art as shown in this blog (Ory & Sirinelli, 1986: 16). Everton (2012: 389) states that artists ‘succinctly defined and expressed Dreyfusard and Antidreyfusard identities’, while caricature in particular could foster a ‘sense of communal identity derived from association and familiarity with broadly drawn types’. More generally, art can be used as a key tool of public message even in the twenty-first century, for example with election campaign posters.

Having considered this, it seems that this Antidreyfusard poster and other caricatural posters are equivalent to the modern-day memes we share online. Both are used to provoke some sort of reaction, typically laughter, and feature pressing issues of their time in a comical light.

Drake, D. (2005) French Intellectuals and Politics from the Dreyfus Affair to the Occupation. Basingstoke: Palgrave Macmillan.