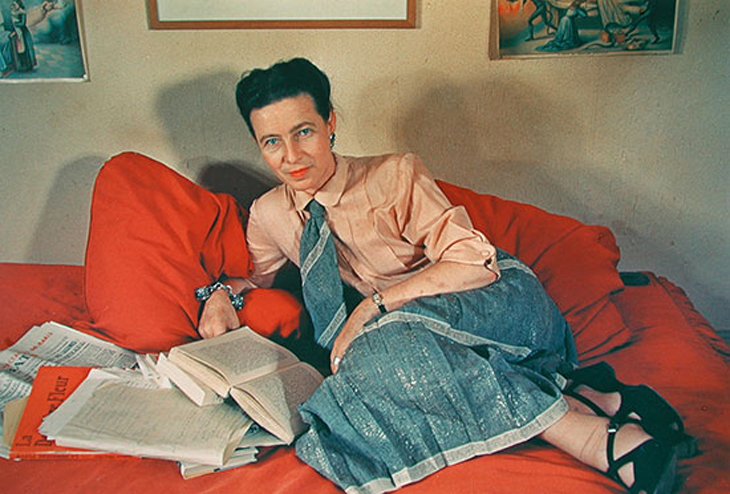 Simone de Beauvoir’s relationship with the media in twentieth-century France is identifiable through her publicly-engaged interactions using various media forms, such as the French journal Les Temps modernes first issued in 1945, in which she first published chapters of Le deuxième sexe (de Beauvoir, 1949). As an intellectuelle engagée (a notion developed by Jean-Paul Sartre), she necessarily assumed le devoir de l’engagement (Wagner, 2003); the intervention required of an intellectual influencer in ‘conquering the virtual public’ (Sartre, 1948) through the dissemination of their ideologies into the public sphere.

In the post-war period, under the Constitution of 27th October 1946, republican ideals became a matter of national importance in France, which included providing equal access to ‘culture’ for all society (Chaplin, 2007: 18). Thus, when television became readily available across the country in 1949 (Scriven, 1993: 5), the ‘transition’ towards a mass media forced the intellectual to reconsider traditional methods of engagement (print news, radio, literature) to now include capitalising on the visual representation of their image, their ideas and their personality.

In order to achieve her political and ethical objectives, de Beauvoir had to embrace the technological advances of the transition period to continue to reach a wider ‘viewership’ via the multiple communicatory veins of the media. Through an analysis of her television interview with Wilfrid Lemoine for Radio-Canada in 1959, I hope to provide a greater understanding of the cultural and political significance of her transitional engagement through which her feminist ideologies prevailed over censorship and sexism, and how this influenced her image as an intellectual.

In undertaking the interview, de Beauvoir had understood that it would be broadcast on Canadian national television by Radio-Canada on 13th November 1959. However, the Canadian Catholic church pressured the television chain into censoring the material, which would otherwise be broadcasting de Beauvoir’s view that ‘le mariage équivaut à un esclavage’ (Société Radio-Canada, 2009), and other equally provoking opinions regarding sexual promiscuity which during this period were too risky for the chain to diffuse. Consequently, the interview was never fully broadcast on television, even after de Beauvoir’s death, and can only be found online in the archives of Radio-Canada.

It is this censorship that in fact promotes an appreciation of the artefact’s cultural significance as a progressive and provocative commentary on gender inequality. The fact that the interview was conducted for a Canadian public’s viewing, yet took place in de Beauvoir’s home in Paris, immediately raises two conclusions regarding de Beauvoir’s engagement. Firstly, it suggests a significant success in adapting her ‘intellectual intervention’ in the media to meet the demands of the transitional period (Scriven, 1993: 5) by securing a television interview. Secondly, it calls into question the French media’s censorship in choosing not to broadcast the interview to de Beauvoir’s native public audience. Despite the rapid technological growth of the mass media, at this early stage television remained a ‘restrictive climate’ where government resistance to political opponents made state broadcasters cautious in their coverage (Chaplin, 2007: 30-31). Therefore, de Beauvoir’s defence of her feminist ideologies within the political context of this interview is evidence of the progressive value for feminist thought of her engagement with the francophone public through a transitional media.

De Beauvoir’s feminist ideology, the subject of Le deuxième sexe, expands on her existentialist ethics by proposing that due to socio-historical conditioning, man and woman’s essences have been assigned as the ‘Subject’ and the ‘Other’ respectively (Marso, 2012: 2). The ‘socially determined condition’ of the ‘Other’ confines them to an inferior position and influences their ability to act (Moi, 1987: 17), but de Beauvoir strives to subvert the preconception that women cannot achieve ‘transcendence’ and choose their own freedom.

It is equally critical, therefore, that the cultural importance of de Beauvoir’s intellectual maturity in the face of Lemoine’s sexist dialogue is recognised. The topic of gender equality raised by Lemoine in this interview is somewhat unsurprising, given the success of her previous works on the subject. What is surprising, however, is the naïve, insensitive manner in which Lemoine introduces the theme into the discussion. Lemoine asks de Beauvoir: “Croyez-vous qu’une femme peut s’engager aussi intensément qu’un homme dans une oeuvre de création artistique ou idéologique ?”, to which de Beauvoir is forced to defend women in their capacity to think and act to the same extent as men, given the same opportunity and circumstances.

The repeated use of a prolonged close up shot accentuates her intellectual superiority by encouraging the viewer to scrutinise her reactions to Lemoine’s provocative question. However, de Beauvoir seizes this opportunity to further establish her feminist ideology, and in the process exposes Lemoine for his sexist ignorance that was representative of the patriarchal society of the period. Paul Smith (1996: 251-255) outlines how the Fourth Republic in France seemed to inherit the outdated gender roles of its predecessors, where in 1945 women still suffered from limitations to their rights as civil persons (such as their social obligation to give birth to and raise children for their husbands) as circumscribed by the Civil Code of 1938. However, feminist opposition had become old-fashioned over time with the granting of universal suffrage. De Beauvoir’s interview can thus be seen as evidence of a rediscovery and a reidentification of feminism being transmitted through her visual representation on television.

The black and white picture removes unnecessary distractions and allows the viewer to focus on the meaningful content of the discussion and highlights her attention to detail in the depth of her answers. Moreover, the dialogue accentuates de Beauvoir’s intellectual dominance over Lemoine, whilst humanising her public image. At points she is forced to carry the discussion when Lemoine fails to and makes it clear that she is focused even when he is not by saying “Je viens de vous dire…”, having already answered his question.

Although she appears blunt, the diegetic dialogue allows the public to view and value her as a human being, rather than trying to engage with her through her written prose. The intermediality of this source, which combines her literary expression of feminism in Le deuxième sexe with her visual and vocal representation as a resilient intellectuelle engagée, can therefore be seen to validate her existentialist feminism in the public viewer’s mind by evidencing her commitment to her engagement despite the regressive political culture surrounding the interview.

Ultimately, through the transgression of the boundary between the two medias – the written word and the television interview – de Beauvoir was able to authenticate her feminist ideologies, previously only found in her literature, for a much wider public audience. Her intellectual engagement through this interview was of paramount cultural and political significance, given the oppression she was submitted to through censorship and sexism. Although representative of the era, it exemplified her obligation to embrace the technological innovation of the transitional media (Scriven, 1993: 8) to propagate her image as a humanised intellectual and to authenticate her feminist ideologies.

All images used are taken from the ‘Image Credit and Interview Source’ below: